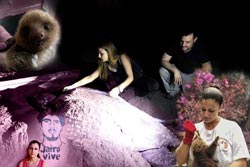 The Rescue Center story starts with one person, Vanessa Lizano. She arrived in Limon, Costa Rica in 2009 with a goal and passion. Her goal was to start a place where injured wildlife indigenous to Costa Rica could be rescued, rehabilitated and when possible released.

She secured a rainforest property in front of Moin beach and soon realized she could not only save wildlife but also endangered sea turtles. Vanessa named her project Paradero Eco Tours. She worked hard for many years building animal cages and walking the beaches at night to find and secure turtle nests. It was hard work but her passion and motivation far exceeded any thoughts of quitting. Within a few years, she had monkeys, sloths, kinkajous, coati and exotic birds all being brought to her weekly by people and government workers around the country. If a baby sloth was found injured or abandoned it was Vanessa who received the call and it was her team she trained who would rehabilitate and eventually release that animal.

The volunteer program was created to bring others, who shared her passion, from around the world. The money volunteers spent to stay and help would be the resource she needed to feed and medicate the animals who were in need. She was surprised to find out how many men, women, and children around the world wanted to help..wanted to make a difference. The volunteer program and donations from generous, kind people around the world kept her afloat so she could continue her mission. Without the volunteers and the donors, the project would have never survived and countless animals would have perished.

Unfortunately, on May 31st, 2013 everything ended. Her best friend and co-worker, Jairo Mora Sandoval, was brutally murdered by turtle poachers on the beach in Limon. Vanessa was not there that night but rather was in San Jose with her son. She received the news the next morning and was filled with feelings of grief, anger, and utter devastation. She had received threats in the past from the turtle egg poachers but never imagined the threats were this real. The murderers were never fully brought to justice.

Vanessa needed to make a decision based on her own life and that of her son. After a period of long thinking, she decided it was best for her and him to relocate back to San Jose for some time in order to keep him safe and take time to breathe. Her parents, Marielos and Bernal, decided to take over her business and ran it from Limon for a few years until the arrival of APM terminal which forced the farm to close. Her parents moved the business to the current location in Turrucares where many of the same animals Vanessa saved remain to this day. The new location became known as Costa Rica Animal Rescue Center.

After 5 years of being away and working a 9-5 customer service job, Vanessa realized she still had that passion deep inside to make a difference. She knew the animals and volunteers still needed her leadership. Her parents asked her to take over the management of the project in Turrucares in October 2018. She immediately accepted and went to work. She put together a management team and hired even more employees. She analyzed and fixed many of the problems that existed at the Costa Rica Animal Rescue Center in Turrucares. Strict rules were put in place on who and how the animals could be touched. She worked hard to bring in 4 coordinators at a time to ensure animal feedings, enrichment, enclosure cleaning, and volunteer management were all done efficiently each and every day. The volunteer program was revamped with changes that included private transportation, a new menu (vegetarian, vegan, etc), new activities, weekly adventure tours as well as turtle tours to safe beaches throughout the country. Most importantly, she ensured the food for the animals was fresh and adequate and started to build proper new enclosures. Vanessa became the new face of the operation and her passion was contagious. The reviews she received were all 5-star and volunteers left happy and fulfilled.

After a year at the helm, Vanessa decided she needed to move in a new direction with more control. She made an agreement with her parents that they could take back Turrucares under their management and she would start her own. Vanessa purchased a 4 hectare (10 acres) property in beautiful Guacima, Costa Rica located 10 minutes from the international airport. Although she was sad to leave the operation in Turrucares she knows she left it in good hands. She also knows that having a second property and being able to work together with her parents and other projects in Costa Rica will ensure even more animals are saved and protected. Divisiveness destroys goals, dreams and communities and in the end the ones that will suffer will be the animals. Vanessa is adamant about wanting to bring projects together to work towards her same common goal.

The new property has so much potential and has exceeded her expectations. It is an enormous project and will take a lot of hard work – something Vanessa has never shied away from in the past. She finally has her own property, website (http://www.rescuecenter.com), management and marketing team and most importantly the name ‘Rescue Center Costa Rica’. Vanessa is back and the sky is the limit at this point to help and save animals. The ultimate goal still remains the same. She intends to rescue, rehabilitate and most importantly RELEASE as many animals that she can.

If your interested in helping Vanessa and in turn making a difference for so many wildlife join her by volunteering, donating or even something as simple as joining our social media and being active. Everyone can make a difference so we hope one of those people will be you! Pura Vida and Vanessa and the animals all look forward to seeing you soon!