rescuecenter.com offers musician,Chris Brown, $5,000 to his charity and a free educational trip to Costa Rica to learn about exotic pets and capuchin monkeys 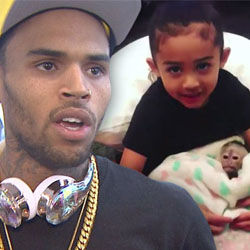 San Jose, Costa Rica – December 27th, 2018 – It seems that fame and fortune is also accompanied by the rite of passage of making ludicrous and poorly-planned purchases – be it huge houses, fast cars,or exotic pets.

Christopher Maurice Brown an American singer, songwriter,dancer and actor was charged earlier today with two counts of having a restricted species and will need to appear in court February 6th.The charges stem from a video he posted last year of his daughter, Royalty,holding a capuchin monkey named Fiji. Authorities investigated and then realized Chris did not have the proper permits. They planned to raid his house before he voluntarily surrendered the monkey. He could face a maximum sentence of six months in jail.

Vanessa Lizano, owner of the Rescue Center (RC) is offering Chris and his daughter an all-inclusive free trip to her San Jose, Costa Rican facility for educational classes about the hazards of owning a monkey as a pet. The RC rescues, rehabilitates and ultimately when possible releases exotic animals including capuchin monkeys. RC currently houses a total of six capuchin monkey’s in addition to over 120 other species.

In addition, if Chris takes the time out his busy schedule to visit and learn about the dangers of owning exotic pets Lizano has offered to make a $5,000 to Symphonic Love, the charity Chris started that helps to create arts programs for the youth in America. She has also promised to name the capuchin monkey cage at the rescue center after and in honor of his daughter Royalty.

Lizano had the following to say, “I believe Chris is an amazing artist who can influence people in a positive way. A person of his stature needs to send the right messages to the world. Owning and keeping a monkey as a pet is not the right message. I hope Chris will join us before his upcoming court date here in Costa Rica to send the right message not only to the judge but also the many people around the world who he influences. I want Chris to become passionate about animal conservation the same way he is passionate about his own charity.”

About Rescue Center Costa Rica: Located in beautiful La Guacima, Alajuela, Costa Rica, is the perfect destination for volunteers and interns from around the world who feel that their hard work and effort can make a difference in the lives of many of the country’s injured indigenous wildlife. rescuecenter.com is not a zoo although many of the animals are un-releasable. The RC believes in the simple philosophy of rescue, rehabilitate and release.

For an interview request regarding this PR please email Vanessa Lizano direct at info@rescuecenter.com or visit the following link: contact